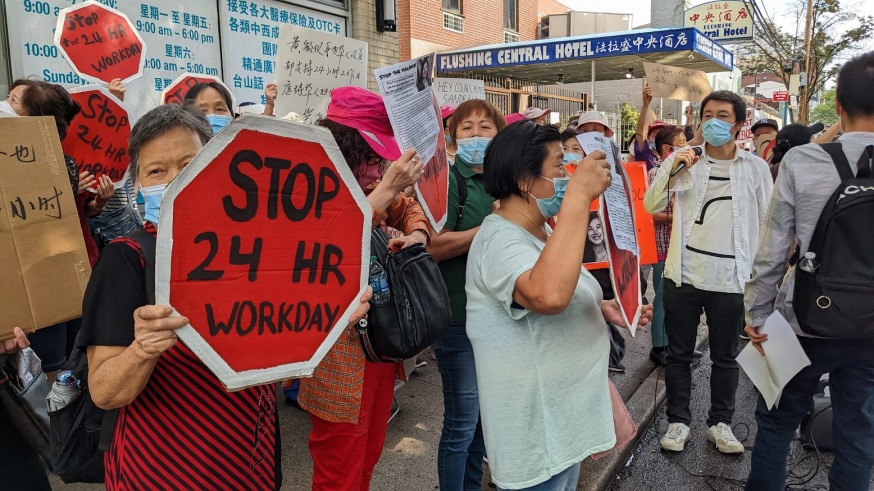 Dozens of immigrant home care workers who look after elderly patients held a protest outside Councilmember Sandra Ung’s district office in Flushing Thursday calling for her to support legislation that they say would prevent them from being exploited. Many protesters say they are required to work 24-hour shifts (Photo via John Choe)

The demonstrators assembled in the rain outside Ung’s 135-27 38 Ave. office at around 11 a.m. demanding that she back a city council bill that would prohibit employers from requiring shifts that exceed 12 hours. Many home health care workers say they are being exploited by their employers, often required to work shifts that last 24 hours.

The legislation, dubbed the “No More 24 Act,” would essentially cap each shift to 12 hours and limit the workers’ weekly hours to 50. Ung, the protesters say, has yet to come out in support of the bill.

The workers — who consist of mostly middle-aged women of Asian descent — provide home care for patients with acute conditions such as those who are bed-bound and suffer from severe dementia. They say the work they do is physically and mentally demanding — and requires them to lift patients at least 20 times per 24-hour shift.

Furthermore, the workers say they only get paid for 13 hours despite working for 24 hours straight per shift.

The protest was organized by the Flushing Workers Center, a Union Street-based group that advocates for immigrant workers.

One protester, Ancheng Tang, told the crowd how she looks after a married couple in their 90s who are seriously ill and bedridden.

“For years I’ve carried them up and down every day, fed them in the middle of the night, and got up every hour to turn them over at night,” Tang said. “This has left me with back pain, eye pain, dizziness, and inability to sleep.”

The protesters say they are particularly upset with Ung for not supporting the No More 24 Act, given that she too is of Asian descent. One protester held a sign that read “Sandra Ung is a racist.”

No More 24 Act has 27 co-sponsors, which is enough to pass should it go to vote, but Ung is not one of them. It was introduced in April but is currently in committee, having not been put to the floor for a vote.

Ung, in a statement to the Queens Post, said that she supports terminating the 24-hour workday, but the bill would require additional state funding since the care is administered via Medicaid through various non-profit organizations.

“Without this commitment from Albany, some of our most vulnerable seniors will lose coverage or be forced into nursing homes, undermining the ability of older adults to age gracefully in their homes.”

Ung said that limiting care workers’ shifts to 12 hours would cost the state hundreds of millions of dollars each year in Medicaid—since additional staff would be needed.

“I call on our state lawmakers to immediately find the additional Medicare funding, which will allow the City Council to pass this legislation to end the practice of 24-hour shifts without adversely affecting our elderly and disabled neighbors who rely on this round-the-clock care,” Ung said. The demonstrators assembled in the rain outside Ung’s 135-27 38 Ave. office at around 11 a.m. and called for the lawmaker to support a city council bill that would end their day-long shifts (Photo via John Choe)

Sarah Ahn @FlushingWorkers calls out @CMSandraUng: “It’s such a shame that our local City Councilmember refuses to even meet and listen to her constituents… You are supporting violence against women of color. You are killing Asian women… You do not deserve to be our City CM.” pic.twitter.com/Gka0dAf1tE

The demonstrators were also upset that Ung did not meet with them Friday. They said they had given her an invitation on Monday to attend the rally and hear their concerns.

However, Shane Miller, Ung’s communications director, said the lawmaker was never invited to attend and had other commitments that morning.

“They never requested a meeting,” Miller told the Queens Post. “They sent a notice on Monday they were going to show up at 11 a.m. but the Councilmember already had several events outside the office scheduled for that morning.”

Miller also said that Ung met with the protesters in May via Zoom. He said they then requested a second meeting and Ung’s chief of staff – who is a legislative director — offered to meet with them but they refused.

Zeke Luger, an organizer with the Flushing Workers Center, told the Queens Post that the 24-hour shifts have a detrimental effect on the workers and also reduce the quality of care given to patients. Luger said that his grandmother receives care from the workers and tends to fall over.

“If you look away for a second, she’ll fall over and that’s very dangerous if the person caring for her hasn’t slept in a couple of days,” Luger said.

Luger said the workers are being taken advantage of because they are immigrants who speak little English. He said that workers in Buffalo – who are mostly white – do the same work for eight or 12-hour shifts.

“That’s why the protesters say this is racism against immigrants,” Luger said.

Helen Schaub, the political director of 1199SEIU United Healthcare Workers East, which represents many home care workers, says the union supports ending the 24-hour shifts but opposes the No More 24 Act in its current form.

Schaub, like Ung, said the bill would cause an immediate disruption in the delivery of home care without having the proper funding from the state.

“This would force thousands of homecare clients into nursing homes and cause workers to lose their jobs,” Schaub said in a statement.