This article was originally published by The CITY on June 28, 2022 By Josefa Velasquez

Less than an hour after polls closed, the Associated Press projected that Hochul, a Buffalo native and former lieutenant governor, defeated Rep. Tom Suozzi of Long Island and Public Advocate Jumaane Williams of Brooklyn, paving the way for her to be the first woman elected to lead the state.

Hochul and Delgado will face off against projected Republican winner Lee Zeldin of Long Island and his running mate, Alison Esposito, who ran unopposed, in the November general election.

“It has been the highest honor of my life to serve as your governor for the past 10 months, and what a past 10 months it’s been,” Hochul said, noting that she inherited a New York in crisis, from a surge in COVID cases, to rising inflation and a racist shooting in her hometown.

“There’s so much more to do. We’re just getting started. As we look forward to that work we must answer one question: Are we going to move New York forward or are we going to let the far right extremists take our state backward,” she added.

The selection of Delgado, whom Hochul picked as her number two last month following the indictment and resignation of her former lieutenant governor Brian Benjamin, came as a surprise to many political watchers and fellow Democrats, who were concerned that having a duo both hailing from upstate would alienate voters in the five boroughs and surrounding suburbs. 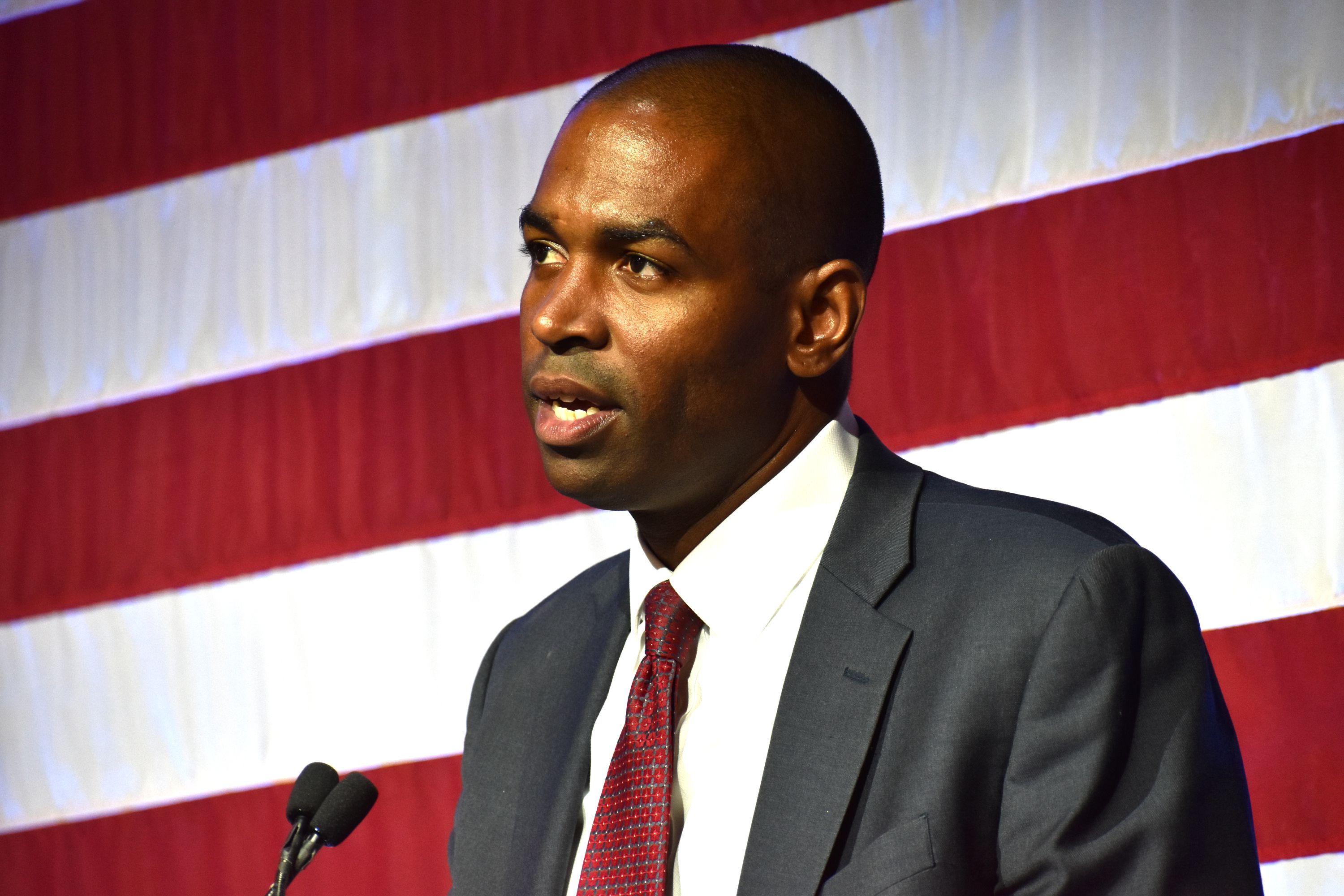 “To all of you out there who have worked so hard for this victory to support our effort, thank you for the trust and the faith that you put in me,” Delgado said in his victory speech Tuesday night in Tribeca.

“People are hurting all across the board,” he added. “We have to combat the forces of hate and division by meeting people where they are.” 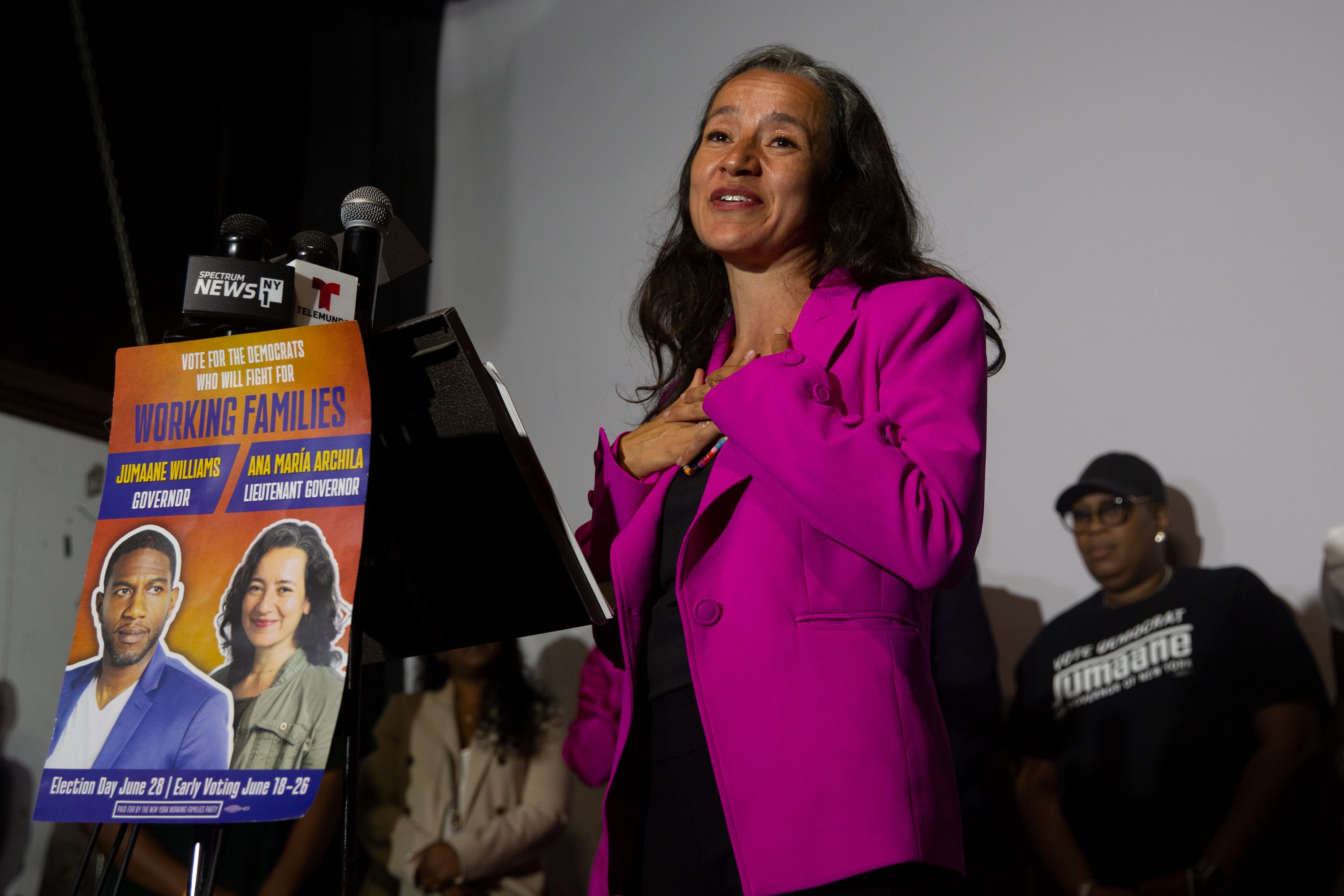 In her concession speech, Archila thanked her “co-conspirator” Williams and Make the Road, the immigrant advocacy group where Archila served as co-executive director.

“I am so proud for what we have done, what we have built in just three and a half months,” she told her supporters at a Bushwick event space Tuesday night. “I am so grateful to the hundreds of thousands of voters who today showed up and took time to cast their ballots.”

“We aspire for a New York that is restored to glory and we can’t do it alone,” Zeldin told the crowd at his primary party on Long Island.

While the Republican primary was largely a referendum on former President Donald Trump, the onetime New Yorker did not offer his support to any candidate in the primary, even though his presence loomed large during debates and in candidate attacks. The elder Giuliani has served as Trump’s personal attorney.

The younger Giuliani offered his full-throated support for Zeldin, urging his supporters to back him in the fall.

In New York, where Democrats outnumber Republicans two to one, the GOP is trying to appeal to New Yorkers’ wallets to sway some voters on the other side of the aisle. GOP insiders and political observers note that for a Republican to win statewide office, they would have to pivot to the center in the coming months.

Hochul’s ascension to the executive chamber has been marred by a New York in chaos and crisis.

The Buffalo native became New York’s first female governor in August after ex-Gov. Andrew Cuomo resigned amid allegations of sexual harassment levied by several women who worked in his administration, marking a remarkable turn of events for a governor once lauded for his pandemic response.

Awaiting Hochul on her first days as executive was a decision on vaccination mandates for employers and an expiring eviction moratorium. She also had to contend with Hurricane Ida, a deadly storm that killed 13 people, including 11 in basement apartments in Queens.

Within months, her handpicked lieutenant governor, former State Sen. Brian Benjamin of Harlem, was indicted over his role to secure campaign contributions in exchange for a $50,000 state grant for one of his major donors for his failed city comptroller campaign.

Hochul named Benjamin even after THE CITY first reported on a cluster of suspicious donations to Benjamin. After his federal indictment, Hochul prevailed on the state legislature to pass a special bill to remove Benjamin from the ballot.

In recent weeks, Hochul had to respond to several high profile violent incidents — from a subway shooting in Sunset Park that wounded 10 people, to a deadly subway shooting days later in Lower Manhattan and a mass shooting at a Buffalo grocery store by a white supremacist who killed 10 Black people.

More recently, as the U.S. Supreme Court overruled the landmark Roe v. Wade decision on abortion and struck down New York’s strict gun laws limiting who can carry a firearm outside their home, Hochul’s campaign has made the governor’s opposition to the rulings a pillar of her candidacy to voters in the upcoming general election. In campaign ads, Hochul charges that New York is “not going backwards.”

“We’re not going to the dark days of the back ally abortions when people lost their lives,” the Buffalo native said in one ad. In other ads, Hochul touted the stricter gun laws that were passed by the Legislature in the wake of the Buffalo shooting, and a separate shooting at an elementary school in Uvalde, Texas.

“When it comes to keeping New Yorkers safe, waiting is not an option,” the governor said in another spot.

State lawmakers are returning to Albany on Thursday for a rare off-session gathering to pass a new set of gun laws to address the concealed-weapon permitting process.

Tuesday’s results likely came from the choices of a small subset of New York voters. Early figures on voter turnout from the city Board of Elections show anemic participation.

As of 6 p.m. Tuesday night, just under 370,000 voters cast ballots in New York City’s June primary. That’s about 9% of the more than 4,000,000 Democrats and Republicans registered in the city, state Board of Elections records show. 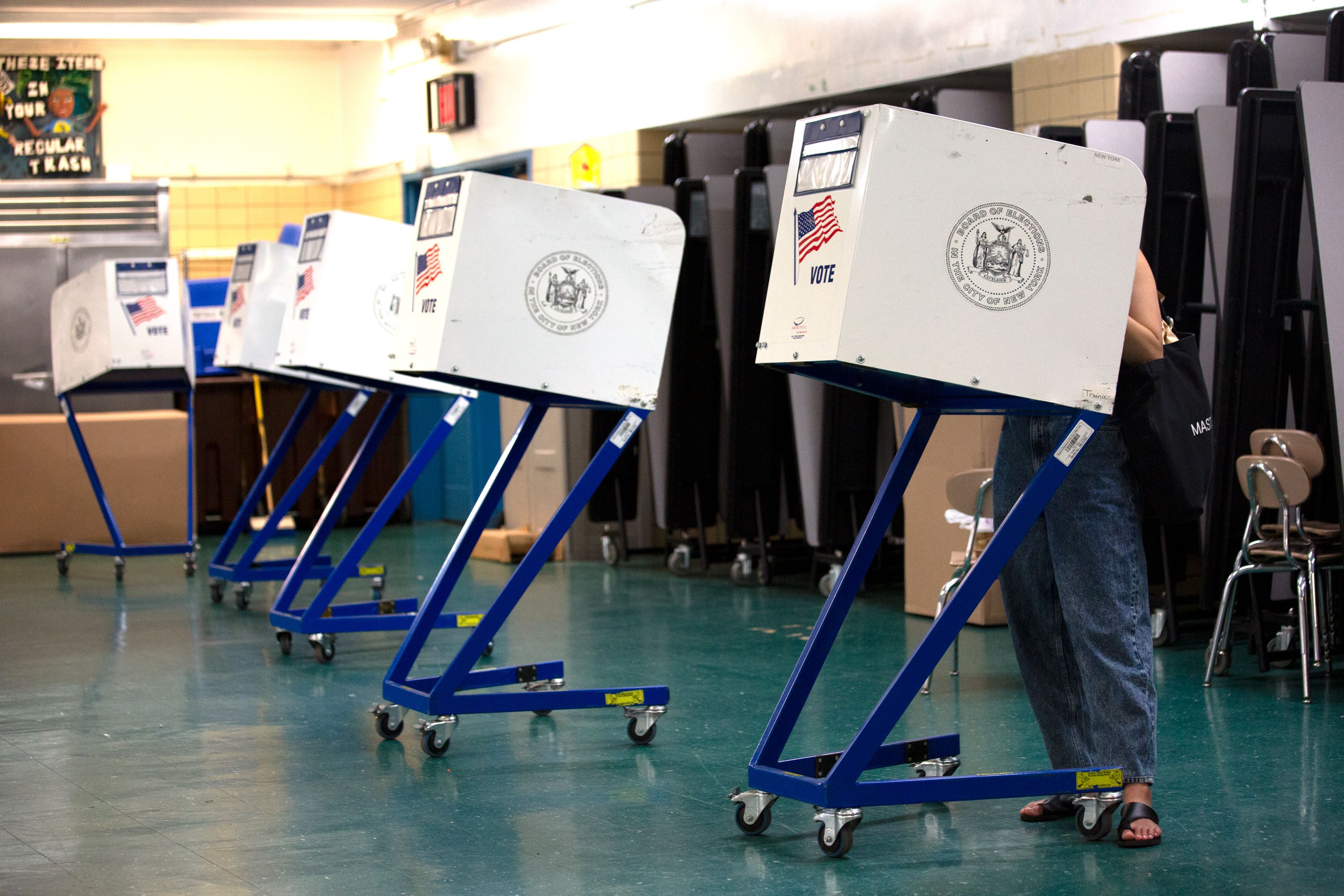 People vote in the Lower East Side on Primary Day. | Ben Fractenberg/THE CITY

Across the city, polling locations were overall quiet on Tuesday. At the Hon. Sonia Sotomayor Community Center on Rosedale Avenue in The Bronx, a poll worker said only a handful of voters had come in Tuesday morning, and attendance was sparse in the afternoon.

At JHS 56 on the Lower East Side, fewer than 30 voters had cast ballots by midday on one of the polling site’s five machines, the site coordinator said.

Nearby, candidate Illapa Sairitupac made a last push with voters in Assembly District 56, handing out literature on the corner of Clinton and Madison streets, pitching that he is the only person in the race “fighting for climate change” and “advocating for laws the help working-class people,” he told THE CITY.

He said he expected very low turnout in the primary, blaming it on voter fatigue and confusion due to New York’s two primaries this summer.

Local voter Grayson Marlow was proud to be the exception as he cast his ballot Tuesday.

“I’ve voted every chance I had. My parents instilled it in me and it’s something I keep up with,” he told THE CITY.

In Brooklyn, 34-year-old Molly de Blanc voted on Tuesday, then tried to figure out how to help a friend who tested positive for COVID Tuesday morning vote, too. 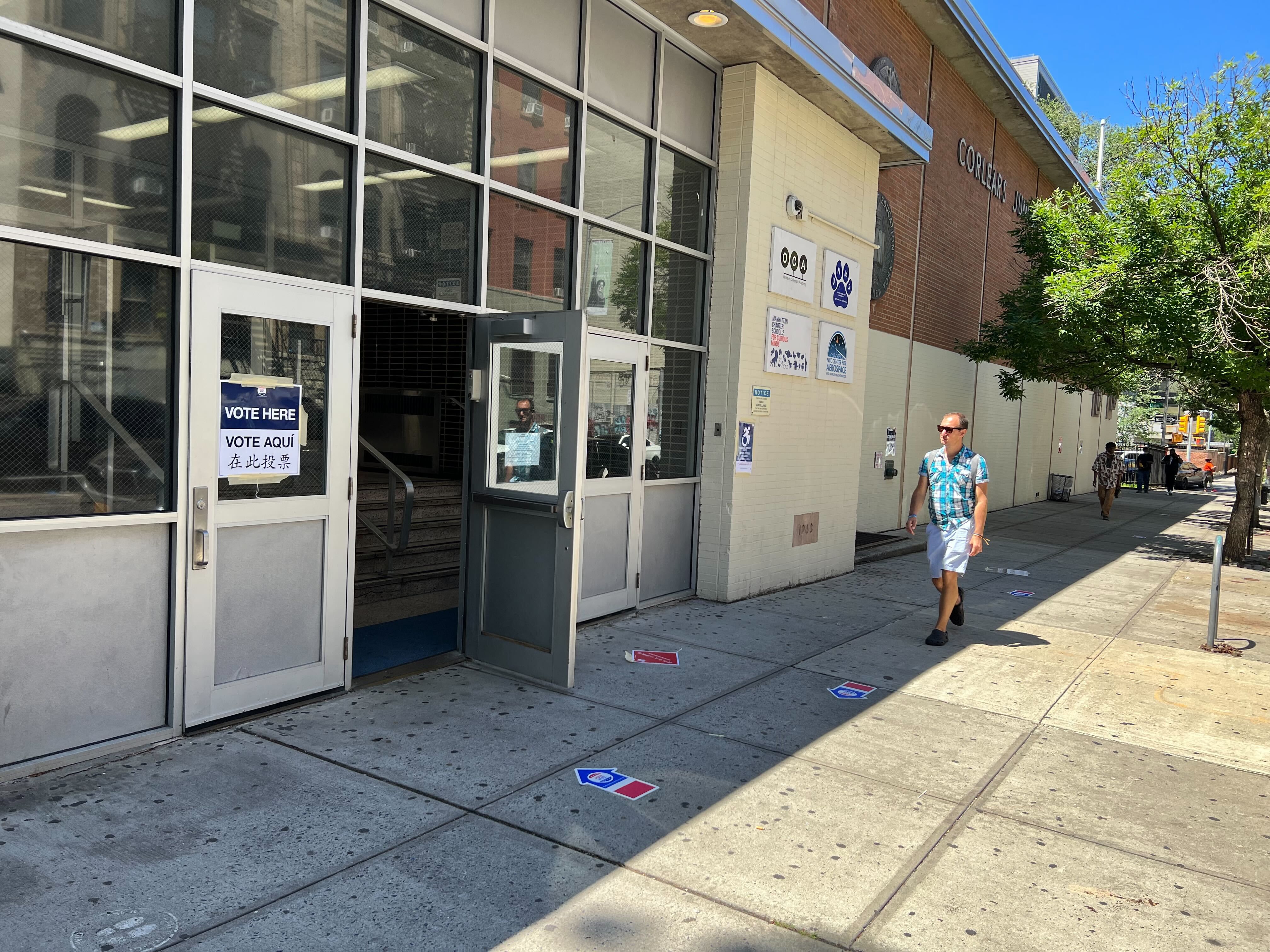 They tried to get an answer from their local poll workers about how to do that, but they couldn’t help. In desperation, de Blanc tweeted at the Board of Elections, but got no clear direction; the BOE replied only that voters with COVID should “follow the recommended CDC guidelines.”

“I was prepared to go down to the Board of Elections and pick up a form and take it to them and drop it off, if that’s what it took. But I couldn’t even get an answer,” they said.

“Everything is such a disaster and I feel like any vote right now really matters,” they said. “What happens in New York is going to impact people all over the country, right? If we become a safe haven, that’s going to matter.”